The US military could gain access to the self-declared state of Somaliland’s strategically positioned port and airfield at Berbera, to counter the Islamic extremist rebel group al-Shabab in Somalia.

This is after US President Joe Biden signed an order on Monday to redeploy hundreds of American troops to Somalia, days after top Pentagon officials visited the Somaliland capital Hargeisa and met President Muse Bihi Abdi.

At the end of his term in 2021, Biden’s predecessor Donald Trump withdrew some 700 troops from Somalia as part of America’s policy of pulling out of global military missions abroad – a move Biden promised to reverse.

Do you have questions about the biggest topics and trends from around the world? Get the answers with SCMP Knowledge, our new platform of curated content with explainers, FAQs, analyses and infographics brought to you by our award-winning team.

The US is reportedly courting Somaliland to use its Berbera port as an alternative to its Djibouti military base.

China, meanwhile, has appointed a special envoy for the Horn of Africa, Xue Bing, and plans to hold the first peace conference in the ­conflict-ridden region. Beijing advocates for Africa to be left to chart its own course out of problems ­without “external” interference.

Al-shabab has been waging a deadly insurgency against Somalia’s fragile central government for more than a decade.

Last week, General Stephen J. Townsend, head of the US Africa Command (Africom), became the highest-ranking US military official to visit Somaliland since 1991. Townsend, US ambassador to Somalia Larry Andre and other US officials travelled to Berbera where they toured the newly renovated port and airport that US Air Forces in Europe-Air Forces Africa assessed last year. US defence department officials also surveyed the facilities in August.

“That assessment and this visit are a part of routine efforts to assess potential operating locations to be able to prepare for contingencies, exercise readiness or adjust force posture as needed,” according to a readout from Africom at the end of the trip.

President Bihi said the visit “reflects a new chapter in our relations”, and that Somaliland’s coastguard contributed to the protection of vital sea routes that benefit all countries.

The visit came less than two months after Bihi’s trip to the United States, when he met government, Congress and Senate members and “requested the US government to recognise Somaliland and have maritime and security cooperation to deter China’s influence”. 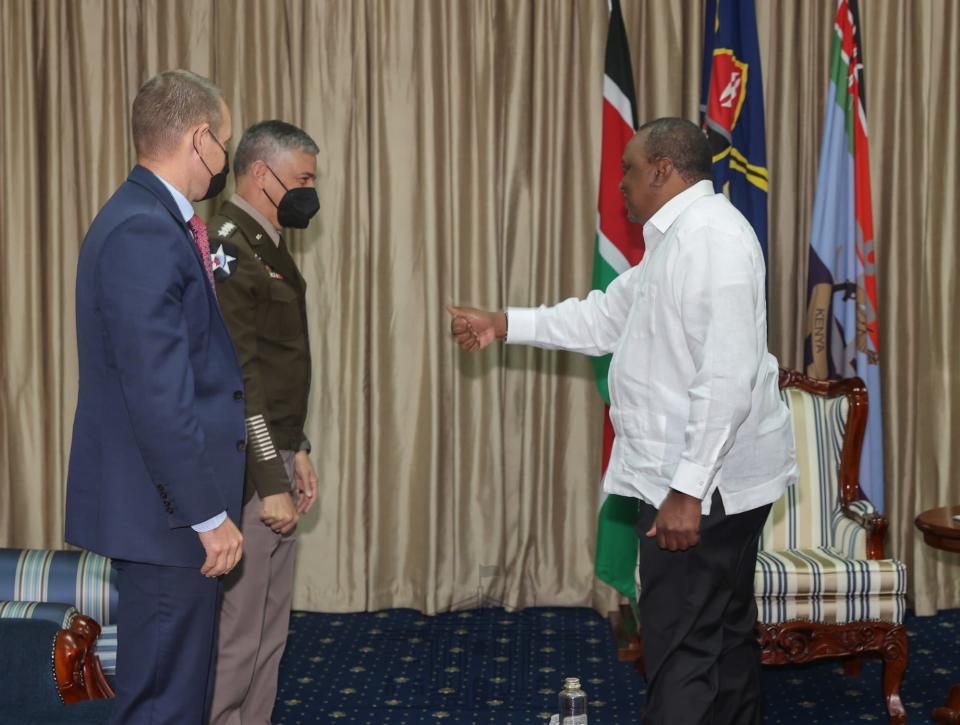 Townsend also visited Kenya – a key American ally in the fight against al-Shabab that has been targeted by the group’s terror attacks – and met President Uhuru Kenyatta in Nairobi on Monday. Kenyatta’s discussion with Townsend centred on peace and security in the Horn of Africa region with a special focus on Somalia.

David Shinn, an American diplomat and professor, said the US was “clearly interested in investigating the prospects for some kind of military use of the port and large airfield at Berbera on Somaliland’s coast” following the decision to return troops to Somalia.

But the situation is complicated. “Washington has good relations with Mogadishu, which says Somaliland is part of Somalia, and the government in Hargeisa might insist on US recognition before it agrees to any kind of military arrangement,” Shinn said.

“I believe the primary goal is to find a more effective way to counter terrorism in the region, especially al-Shabab in Somalia. Berbera’s airfield would be especially useful for this purpose,” Shinn said.

“China is more concerned about the impact of US-Somaliland relations on Hargeisa’s growing ties with Taiwan,” he added.

Guled Ahmed, a non-resident scholar at the Middle East Institute, said: “Townsend’s visit may be a sign that talks of security cooperation are moving along and may be entering their operational phase of actually seeking a base in Somaliland.”

Ahmed said the US game plan was to use the Berbera port as an alternative to the Djibouti military base to adjust its posture in the Horn of Africa region by partnering with the Somaliland government.

That would give the US a key geostrategic location to counter Chinese influence, protect trading routes, and deter human trafficking, terrorism and piracy, he said.

Camp Lemonnier, a military naval base in Djibouti, is the only permanent US military base in Africa with more than 4,500 military and civilian personnel.

A few miles from there, China in 2017 set up its first overseas military base – a facility that continues to cause unease in Washington. China has between 1,000 and 2,000 military personnel at its base, according to various reports.

In 2018, the US accused China of pointing lasers at its pilots from Djibouti base, but Beijing dismissed the reports as “inconsistent with facts”. The US alleged the military-grade lasers originated from the Chinese naval base.

In addition, a move by Taiwan – which Beijing sees as part of its territory – to open a representative office in Hargeisa in August 2020, and Somaliland’s move to have a similar office in Taipei in 2020, has annoyed Beijing. Chinese Foreign Minister Wang Yi in February said the Taiwanese-Somaliland relationship threatened “the sovereignty, independence and territorial integrity” of China and Somalia.

John Calabrese, head of the Middle East-Asia Project at American University, said the US was in a “tight spot” in trying to build constructive relations with Somaliland, which is seeking independence.

Calabrese said the US would be reluctant to extend recognition to Somaliland because it could strain ties with Somalia, whose cooperation Washington sees as useful in pursuing its counterterrorism agenda.

He added that Townsend’s visit was “aimed at assessing the potential for Somaliland’s port and airfield to be used for contingency operations rather than as a substitute for, or to pair with, Camp Lemonnier”.