Charles Schwab’s purchase of 1 million USAA accounts will benefit the industry titan’s bottom line — but it will also cut into returns on cash belonging to veterans and their families.

As part of the deal set to close in 2020, Schwab will sweep $7 billion in cash from USAA retail brokerage accounts — currently held in money market funds — into Schwab’s bank, CFO Peter Crawford told analysts and shareholders on a webcast last week.

“We’re moving all that over to the balance sheet,” he said. While Schwab will alert USAA clients about the change, and they will have the option to choose better yielding options for their cash themselves, Schwab will benefit from inertia. The company estimates it will generate approximately $130 million in additional annual revenue following the deal, which Crawford said would primarily come from the sweeps.

Moving cash from money market funds will lower cash yields for veterans and their families. USAA client accounts, on average, keep almost 13% of investments in brokerage cash or managed money client cash balances, according to the Schwab webcast presentation deck. 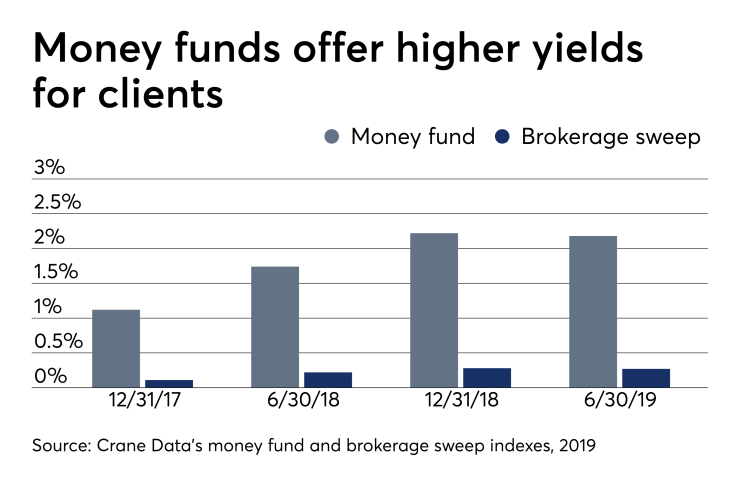 By contrast, Schwab’s bank sweep will give USAA clients a 0.26% annual percentage yield (clients with over $1 million invested will have a 0.65% APY), according to the company.

Interest-earning assets are profitable for Schwab, which earned an average yield rate of 2.42% on cash and cash equivalents in the first quarter of this year, according to the company’s earnings statement.

“The default for short-term transactional cash in Schwab accounts is Schwab Bank deposit, which provides our clients with FDIC insurance on their cash holdings. However, we will be consulting with those clients on their cash holdings, and offering them alternatives if that cash is part of their core investing strategy vs. transactional cash, in which case we can offer them a wide variety of higher yielding cash alternatives including purchased money funds, CDs, etc.,” said Schwab spokesman Glen Mathison in an email.

Schwab finished moving all its own brokerage clients to a default bank sweep in April, according to the earnings statement. Mathison said the firm consulted with clients about the sweeps. “We notified them of the change in advance and provided an explanation of alternatives for that cash if they preferred to deploy it as part of their investing strategy.”

Mathison declined to provide the distributed communication, and sent a link to the company’s cash disclosure page.

Bank sweeps offer clients certain perks: FDIC insurance and access to features like ATM access, online bill pay and free checks, according to Schwab. The brokerage also charges less for trading than USAA — Schwab’s commission is $4.95 on online stock trades, while USAA charges $8.95, according to the companies.

Schwab moved $11.6 billion out of money market funds in the first three months of 2019, according to its earning statement. Schwab’s average interest-earning assets were 15% higher in these months — primarily due to the bank sweeps — compared to the year-ago period, the filing says. The sweep also played a key role in saving the company $96 million in asset management and administration fees.

Schwab is far from the only brokerage that is looking to profit from cash.

“It’s sort of become an industry practice,” says Tim Welsh, a consultant at Nexus Strategy, referring to the bank sweeps, who notes it’s a natural next step as fees fall.

“Brokerages have been under severe stress to find new areas of profitability, and bank sweep programs were a godsend for them,” he says.

“It’s just the facts of $5 trades,” Welsh says. “Somebody’s got to pay for something. You can’t have really low discounted trades and four basis point ETFs and no commissions. Somewhere, that revenue has to be made up.”

Bank sweeps put the onus back on clients, Welsh says, because they can look for higher returns on their cash if they choose. However, many clients won’t realize it’s happening — or put the time toward making a change, he says.

“Default settings are the advantages of the incumbent, which is the broker-dealers of the world,” Welsh says. 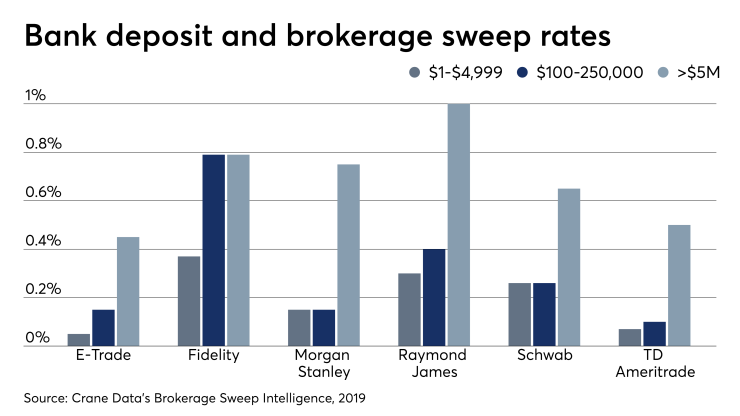 “All you have to do is call or click or ask and do a position trade or a ticket trade to move into a higher yielding money fund,” Crane says.

As of July 17, there were almost $3.3 trillion assets invested in money market funds, up from $2.8 trillion this time last year, according to data from the Investment Company Institute and compiled by Crane Data.

At the end of June, there were $168 billion assets in Schwab’s proprietary money market funds, up from $134 billion in the year-ago period, according to SEC filings.

Not all firms are turning to bank sweeps. Vanguard warns clients of lower returns that stem from bank sweeps, saying clients may not be getting their “fair share of earnings,” according to the company’s website.

“We think it’s in a client’s best interest to maximize the yield they earn on cash. Every dollar counts,” Vanguard spokesman Freddy Martino writes in an email. “The incremental yield offered by a money market fund over the average bank account can be significant. In an age where investors are comparing single basis points on similar investments, the additional yield they earn on cash can far outweigh a few basis points elsewhere in their portfolio.”

Robo advisors including Betterment and Wealthfront offer competitive high-yield savings account rates for clients, as do digital banks including Ally and Barclays, which offer north of 2% returns.

As for Schwab, there is a little more than $4 billion of USAA client money held in the company’s robo advisor that will not be swept into its bank. This cash “represents an investment allocation decision and, therefore, is not contemplated as part of the sweep to bank cash,” according to Schwab’s Mathison.

Following the deal, USAA clients will have access to more products and investment services, a cheap price tag and great service, Schwab says.

Will the company live up to USAA clients’ expectations?

“[USAA] has a high standard of service,” said analyst Richard Repetto of Sandler O’Neill, who announced he was a USAA member on the webcast.

“I don’t think [USAA] would do a deal where they thought they would compromise that level of service with customers,” he says.